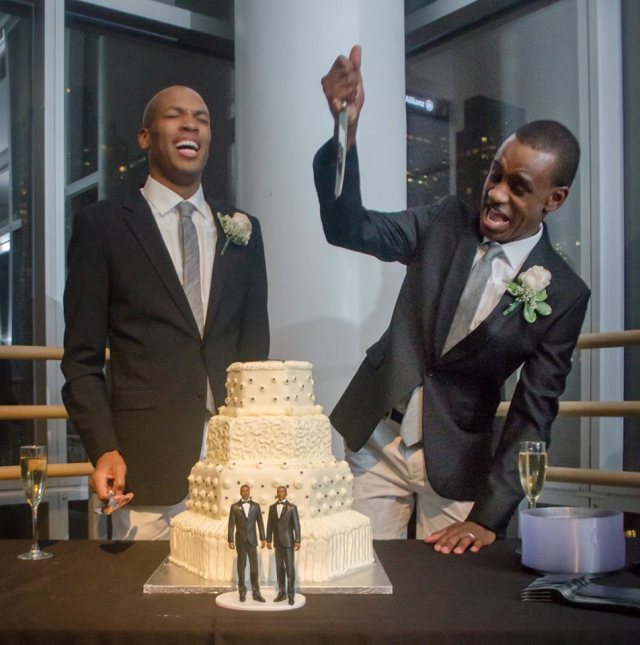 When Antonio Douthit-Boyd and his husband Kirven Douthit-Boyd first met, they were both in other relationships. “Our boyfriends at the time were good friends,” Antonio recalls. But that didn’t stop them from having a connection. “Soon after our first encounter we both auditioned and got into the main company of Alvin Ailey.” About a year later, they were both single and realized how strong their chemistry was—both onstage and off. “We dove in and have been together for eight years.”

Earlier this year, they were touring the country with Alvin Ailey. One morning, while having their coffee in bed and reading the newspaper, Antonio came across a story on gay marriage in New York. “I said to Kirven, ‘We should do it.’ And he said, ‘What?’ I said, ‘Get married’ and he was like, ‘ok,’” Antonio, who originally hails from St. Louis, recalls. Perhaps it was not the most romantic proposal, but he says it was just right for them.

That was last February—and since they had already been together the better part of a decade at that point, they forwent a long engagement and started planning their party straightaway. The couple originally wanted to keep things small and intimate, but soon realized that they were going to need a bigger space. “We were determined to keep it small,” he says. “I even called and told my mom that we were getting married and that we wanted her to know, but there was no need for her to come all the way to New York—we would do something with her when we came to St. Louis,” he explains. “Needless to say, she did not like that idea.”

With an exponentially growing guest list and few ideas on where to turn, they decided to keep things in the family. “We thought, ‘why not rent out the place [where] we found love: the Ailey studios?’” And they did just that. “Everything fell into place,” the Harlem-resident beams. “The closer and closer we got to the day, I think we both turned into a little groom-zilla,” Antonio slyly admits. “Me a little more than him. Ok, a lot more, but hey I have great taste,” he chuckles.

The day of the wedding, the dance duo traipsed uptown and downtown, a real New York day. First, they went to City Hall, each with three of their closest friends in tow, to sign the marriage license. Then, they headed back uptown for brunch at Red Rooster with their bridal parties. After that, they had to head downtown again to make sure all the preparations were coming along for their ever-growing event, which, of course, they were. “Kirven’s mom, whom I love and adore, made the food with his grandmother and aunt,” Antonio recalls. At that point, every thing was there. “Most importantly the DJ was there, so Kirven and I left to go to the hotel and get ready while the guests all poured in”—literally, it had been raining almost the entire day. No matter, though. “All of our guests came and even ones we did not invite, but that did not matter because it was about us that night,” the now-happily married man reminisces. “And it was perfect.” 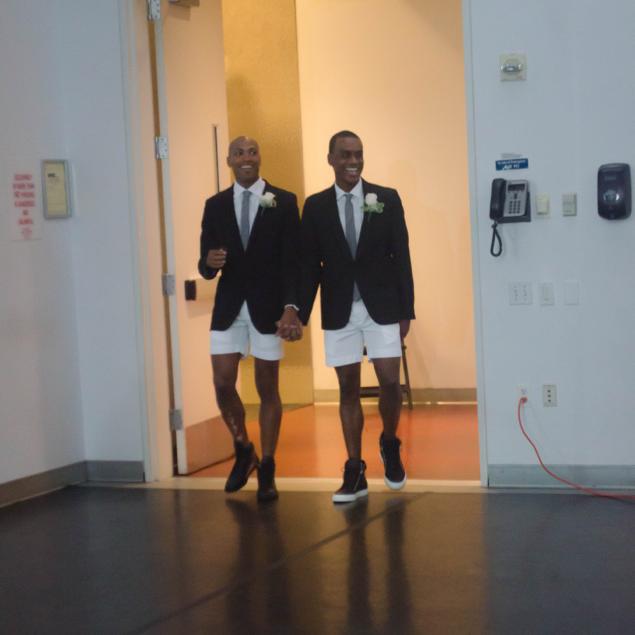